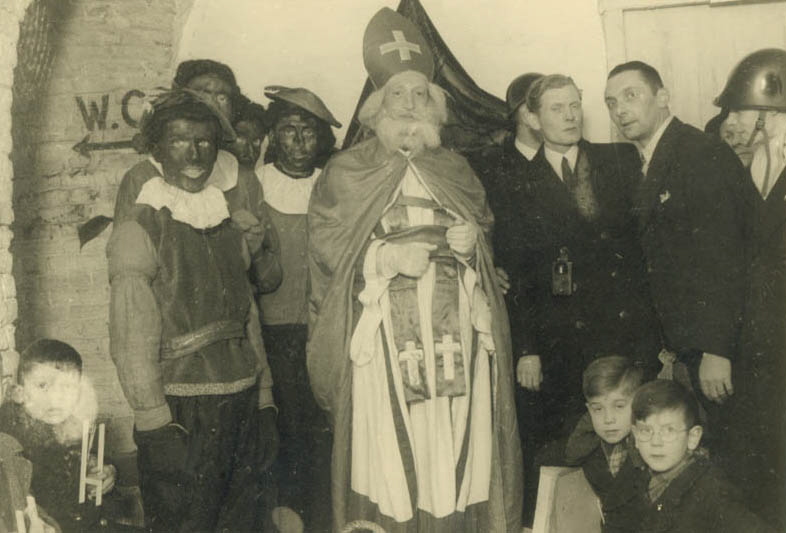 You might have spotted them on Maastricht’s streets already: a bearded old man dressed as a bishop and his exotically dressed helper. They are Saint Nicolas (Sinterklaas) and Pete (Piet) and they’re here to punish the naughty children and treat the nice.

Sounds familiar? Well you’ll find that Saint Nicolas is celebrated throughout Europe and North America in one way or another. But nowhere as extensive as in the Netherlands. Also ‘Pete’ is a typical Dutch addition. For instance, right across the border in French speaking Belgium, Saint Nicolas is accompanied by yet another character: Père Fouettard, translated as Father Whip.

Although Pete used to do some whipping in his days as well, he has transformed into Saint Nicolas’ merry companion over the last decades. Where naughty children used to live with the threat of defeat, bagged and sent to Spain, these days Pete’s bag just holds presents and candy, which he throws out into the crowd.

In Maastricht, Saint Nicolas is pretty much celebrated as in the rest of the Netherlands. The festivities start with his televised symbolic entry into country by steamboat directly from Spain in mid-November. He and his sizeable army of Petes dock at a preselected Dutch town and are greeted by the local mayor, a marching band and loads of singing children.

There’s a massive amount of Saint Nicolas songs, with new (more commercial) ones added every year to the repertoire. (There’s also a song in Maastrichtian: Sinterklaos dee heet gezag / Veer mage speule, veer mage speule which translates as Saint Nicolas told us / we can play, we can play). As the singing continues the Saint then rides through town on a horse, while the accompanying Petes hand out candy and do silly tricks. After day one, you will notice that Saint Nicolas has duplicated infinitely and appears at different places at the same time. Quite similar to agent Smith in the Matrix, just with different intentions.

After arrival day, the whole process is repeated as Saint Nicolas enters Flanders (again televised) and is welcomed in the same style in all other Dutch towns. If there’s no water nearby, he might come by steam train, old-timer or on a tractor. In Maastricht, he most of the times arrives by boat though. After all the formalities, he settles down in a local shop on a boat docked at the Kesselskade, in department stores and wherever. He is also frequently spotted on the streets, in schools and even in the work place. The most Maastrichtian about Saint Nicolas in Maastricht (also called ‘Sinterklaos’), is that he speaks Maastrichtian…

In the run up to present evening (5 December), children will place a shoe next to the heating (by lack of fire place or chimney). In the shoe is a carrot or sugar, which is meant for the Saint Nicolas’ horse. The next day, a chocolate, a mandarin or another treat has mysteriously appeared with the help of Saint Nicolas and Pete. On December 5,  Saint Nicolas seemed to have made an appearance and the children are presented with gifts. Daanke Sinterkläöske (thank you Sinterklaas)!

By age of nine or ten children learn of the horrible deceit they have been exposed to whole their lives: Sinterklaas is not real. Tears are shed, but most children recover from the dramatic news and play along the year after. After this age, they join the adult celebration of Saint Nicolas, which commonly revolves around arts and crafts (surprise in Dutch): wrapping your gift as original as possible. I remember putting mine in plaster once and wrapping it up as an army tank.

The anti-climax of the Sint Nicolas celebrations follows on 6 December, the actual day of Saint Nicolas on the Christian calendar. He leaves to Spain. Sometimes there’s a ceremony marking his departure with a special song for the occasion: ‘dag Sinterklaasje, dag, dag…’ – Bye Saint Nicolas, bye, bye.